Aloha from the land of beautiful beaches, macadamia nuts and Abercombie & Fitch??

A look at Honolulu, Hawaii

Having really not taken an extended vacation in a number of years, trying to plan one that would ultimately be 4 months to 1+ year(s) was pretty much a foreign concept to me. The more I read books and travel blogs on destinations and things to do, the more I realized an infinite number of possibilities that was exciting, yet overwhelming at the same time. So to refine my locales, I decided to narrow the search by focusing on places that a)I had never been before, b)provided accommodating climates (basically no snow) and c)would enable me to check out some cool coastlines. Ultimately I landed on Australia and New Zealand as starting points.

While these countries really interested me, the 15 hour flight to get there did not - especially for a 6'2" guy in cramped airplane seats. So to make things a bit more comfortable, I figured a layover to break up the travel would be perfect, especially when that option worked out to be Oahu, Hawaii.

Day One:
I checked-in around 4 in the afternoon to what would be my home for the next 6 days, located in the center of Waikiki. There, I met a fellow traveler from Canada named Cameron, who had just checked in as well. With both of us being solo travelers and new to the area, we made plans to check out Pearl Harbor the following morning. Also within my room, I met Bo, who was just finishing up a trek through the States before she made her way back home to Sydney, Australia. It was enlightening to see how Hawaii in some respects served as a hub for all types of international travelers (to/from the US). Within my first day, I was pretty happy with the quality of people I was meeting and the ease with which it was happening.

Day Two:
We all see the postcards, Hawaii is supposed to be sunny every day, maybe with a short tropical shower here or there. On this day, Hawaii did not cooperate so well with that image. Day two brought overcast skies and drizzle throughout the afternoon, but thankfully, for the purposes of visiting the Pearl Harbor memorial, it did not really constrain us too much.

The Pearl Harbor Memorial was very interesting and something I'd recommend to others who come out here. With any memorial of this stature that is entrenched in American history, it will tug at your heartstrings a bit but also serves as an excellent re-education on the events that led up to and followed the attack - as well as some chance circumstances on the day of the event that were very impactful (i.e. all US Carriers being at sea on this day).

After going through the exhibits on the memorial ground, we boarded a boat out to the floating memorial which rests above the USS Arizona - where 1,177 sailors lost their lives and now rest at the bottom of the sea within the ship. Of all the vessels bombed that day, the Arizona took the most damage and is the only one that was never recovered from the seafloor.

The memorial has open panels in every direction (to let in as much sunlight as possible) and lists all sailors who passed away that day. Furthermore, for those servicemen who worked on that ship and survived that fateful day and have since passed, they had the option to receive a special burial service in which a ceremony is held at the memorial and their remains are placed in the ship with their other fallen comrades..

One other interesting thing of note at the memorial is what is known as "the tears of Arizona." The "tears of Arizona" are seen as a thin film of fuel that floats on the ocean surface around the memorial. The reason for this oil is that the USS Arizona had been carrying 500,000+ gallons of fuel and as such, it still leaks ~2.5 gallons every day ever since the bombing (it is something that is monitored for environmental sensitivity but currently left untouched as not to impact what is now an underwater tomb). There. You learned something today...you're welcome

Day Two:
I had signed up on Couchsurfing.org not really knowing what to expect but figured it was a worthwhile avenue to explore. For those of you who don't know what Couch Surfing is, it is an online community where like-minded travelers can seek and offer up "couches" in their residences as a place to stay - its a unique idea that enables new connections among cultures, while saving people money. For a solo and open-minded traveler, it can be an invaluable tool if you understand how best to leverage it (I'll talk about this topic more down the line most likely).

That said, before I left from Southern CA, I had done some investigating on the site and had actually got in contact with a couple people (including one from LA) who would be in Oahu at the same time as me. I wasn't looking for a place to stay but rather just people to hang out with. Randomly, the girl from LA who was on this site ended up staying in the same hostel as myself and as such, the two of us and a couple other people from our place ended up spending the day on Waikiki Beach, as the sun properly made an appearance. The shades of blue and warmth of the water were a pleasant change from what is often seen in Southern CA.

Later that night, I went to dinner with the two friends I was sharing a space with, Cameron and Bo. Bo, who was on her last couple nights in the states, had been in contact with a friend who now lived in the area. It was a great opportunity to check out the local cuisine and find out some insider things to do during the rest of our stay.

For dinner, we ended up at The Yardhouse (okay, maybe that place isn't specific to the Hawaiian culture, but it was still good!). At dinner, I met Bo's friend Andrey, a former rugby player, along with his wife, who had grown up on Oahu. We had a great dinner and they were nice enough to map out a tour on the back of a receipt of all the spots to hitup around the island. It was insightful information, and having this in hand, we decided that the next day, we'd rent a car and drive around the island to all the spots they noted.

We picked up a rental car at 9 that morning to get in a full day. It was myself, Bo (from Sydney), Hannah (from LA) and Summer (from Japan). As one of the only two Americans (who drive on the proper side of the road) and being the only male (thus an innate knack for directions and not needing to ask), I drove.

It was unclear how the weather would hold as there were chances of rain so we just made the logical decision to drive away from the clouds and see what beaches that led us to. Our first real stop was to Hanauma Bay, which is renowned for snorkeling with its extensive reefs. 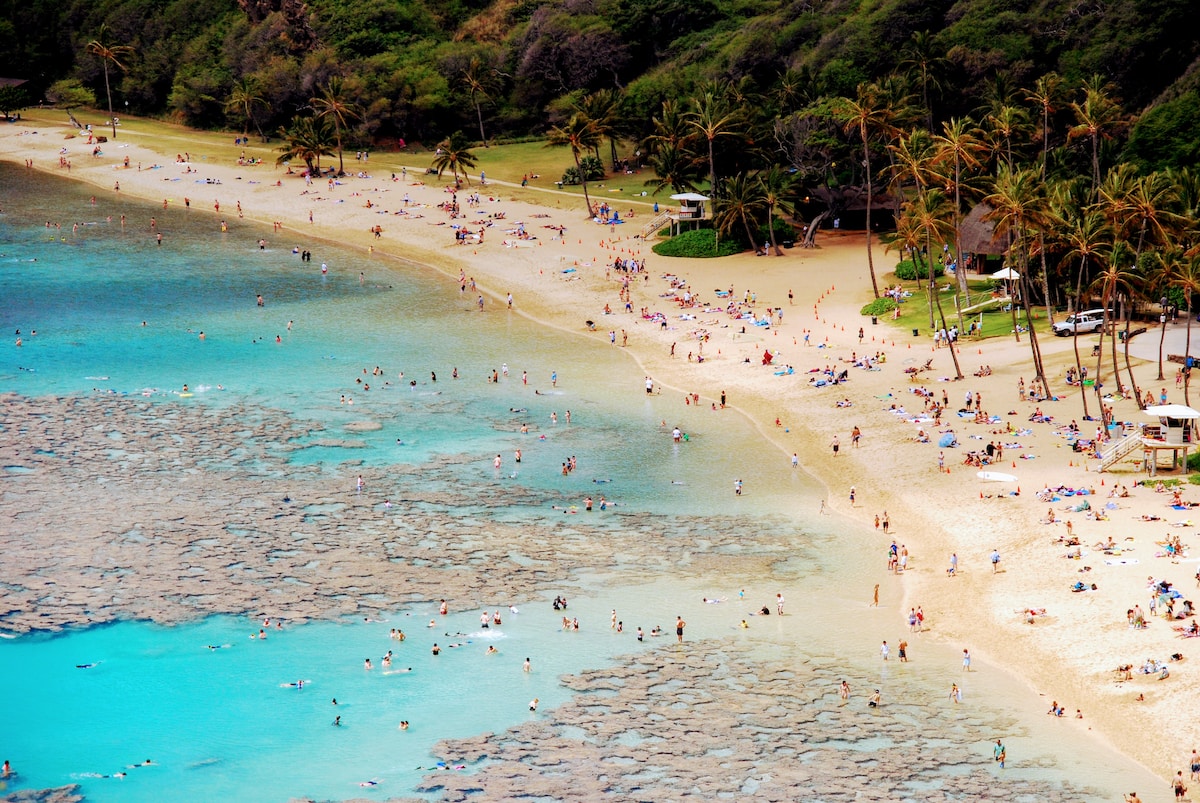 We spent a couple hours at the beach catching some rays and snorkeling with some pretty cool fish. There was even an elephant seal chilling on the beach. After that, we stumbled on some random beaches in town before grabbing lunch at a spot recommended by our friends from the previous night, Papa Oles.

Driving along the coast we saw some cool countryside scenery and areas that you wouldn't necessarily associate with "Hawaii" until we found ourselves on The North Shore (yes, there's a movie called this and its worth checking out - it's the equivalent of Sideout for Beach Volleyball, another fav). Compared to the rest of the island, the North Shore is much more secluded, slower paced and pretty much a local surfers paradise, with the most famous enclave being Waimea Bay, where we stopped to relax for a few hours. On this day, it was literally a bay, no waves in sight.

But on winter days, this area is world renowned for huge waves where some of the best surfers from across the world come during big swells.

Days Four & Five:
The next few days, I got some volleyball in at the beach (Hooray!!) and also used a rainy day to do a bit of local shopping at the island's biggest shopping center (called Ala Moana), which reminded me a lot of San Diego's Fashion Valley.

Two things that stood out to me about shopping in Hawaii:
1) Tourists out here LOVE Abercrombie and Fitch (a lot of Japanese specifically it seemed like). I had no idea, but there just seemed to be a ton of people walking around with those bags and in fact, when I walked by that store, I saw multiple people taking pics outside of the storefront...random.

2) I had seen that the mall had a T&C Surf Designs Store. To be honest, I was pretty excited to pick up a shirt here as I pretty much wore those t-shirts growing up as a kid with the various cartoon characters (Tiki Man, the surfing Gorilla, etc...) on them. In fact, I even had the Nintendo game where you'd skateboard and surf the entire time - it was pretty awesome. What I found was a little disappointing - the T&C logo remained, but the cast of characters was gone and thus I could not find anything to my liking. Seriously though, they need to bring those characters back and put them on their merchandise. They'd make a killing with those for people like myself who grew up with those characters.

Day Six:
It so happened that the time of my trip coincided with the "Honolulu Festival." So what exactly does that mean? Well, basically that there was a huge parade that went through the city presenting the different cultures of the island, a bunch of floats, a pretty sweet inflatable dragon (didn't have my camera on me at this time) and a bunch of fireworks to close the event down.

Day Seven:
I found that sharing a space with others is not necessarily conducive to catching a shuttle at 5:15am to Sydney, Australia. Trying to finish packing in the dark while not waking others up is difficult (even having done much of it before). Thankfully, I made my shuttle and said goodbye to Hawaii until the next time.

Subscribe
Previous
Finally, the first travel post of many
Next
3 Tried & True Tips For Finding Pickup Volleyball Games
Return to site
All Posts
×

We just sent you an email. Please click the link in the email to confirm your subscription!